Nick Houstoulakis is entering his 13th season as the Head Boys Track & Field Coach and 8th season as the Head Girls Track Coach at Marietta High School. After taking over a very successful program, the boys team continued its winning tradition by bringing home their 9th consecutive regional championship to go along with the five consecutive Cobb County Championships. Coach H and the staff also guided our girls to the to four consecutive region championships (16,17,18,19 &21) and 7th in 8 years as well as the 2018 class 7-AAAAAAA STATE CHAMPIONSHIP. Coach Houstoulakis is USATF Level II certified (Sprints, Hurdles & Relays), (Endurance) & (Jumps)  and he is the sprints & relays coach for our high school & middle school programs.

Coach Houstoulakis is a Physical Education/ Health Teacher at Marietta High School. He coached 11 season of football at MHS as a varsity defensive backs coach. Coach H returned to the boys basketball program as the head 9th grade coach for the 19-20 season. He coached 2 seasons of Basketball at MHS with his last season as the Varsity Assistant Boys Basketball Coach in 2009 when our Blue Devils made a run into the Sweet 16. This past fall/winter, Coach H had the honor of starting the girls flag football program for their inaugeral season in 2020. The girls varsity flag football team finished 7-2-1 overall and qualified all the way to the third round of the playoffs.

Nick Houstoulakis earned his Bachelors degree at Eastern Michigan University in Physical Education & Health and his Masters degree in Health Education from the American College of Education. Before moving to Georgia, Coach Houstoulakis coached football, basketball and track at his alma mater Livonia Franklin High School in Livonia Michigan. Coach H coached 9 years of track there with the last 4 season being the Head Boys Track coach. He coached 8 years of football with the last 5 seasons working as the Varsity Special Teams Coordinator and Running Backs Coach. He coached 4 season of Basketball with the last 3 as the Head Boys JV Basketball Coach & Varsity Assistant.

He currently resides in Woodstock, GA with his wife Lynsly who is also a Marietta City Schools employee at Marietta High School and their two daughters, Nikolette (10 years old) and Ellyanna (7 years old).

Coach Coleman has been at MHS for the past 20 years as Cross Country coach and the last 7 years as assistant Track and Field coach in charge of distance running.  Previously he coached Cross Country and Track & Field at East Paulding High School in Dallas, GA from 1995-2000.  In the past decade, the Boys & Girls Cross Country teams have enjoyed success at the county, region, and state competition levels with the boy’s team winning State Championships in 2014 & 2015 and the Girl’s team in 2017 & 2018.   The 2015 boys’ team finished 1st @ Nike Southeast and 15th at NXN National Championship meet.  This was the best finish ever by a Georgia team.  Coach Coleman earned the 2014, 2015, & 2018 Georgia Cross Country Coach of the Year award.  Coach Coleman believes consistent training is the key to success in distance running. 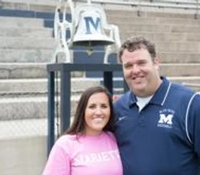 Charlie Crittenden is entering his 10th season as the throws coach for the Marietta High School track program and 11th season overall coaching track.  He has been very fortunate to coach quite a few very hard working and dedicated throwers.  This aspect of the program continues to grow in the number of student-athletes that are coming out to learn to be a major part of a program with such rich tradition.

Coach Crittenden has been an English teacher at Marietta High School for nine years. He is married to Meredith Crittenden.  He has two son's Jordan and Lucas who love to interact with dad's throwers.  He attended Randolph-Macon College in Ashland, Va.  He received a Bachelor of Arts in English while playing on the football team for four years. 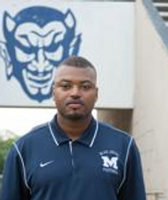 Derrick Tinsley is a Paraprofessional and Coach entering his 5th season as the long and triple jump coach. Born in Marietta, GA, Coach Tinsley is a graduate of Marietta High in 2001.  He played football for James “Friday” Richards from 1997-2000. A four year starter at running back, Coach Tinsley became an all-county and all state football player. Also a track star for MHS, Coach Tinsley was an all-state contributor on a successful track team that won region championships 1998-2001 and back-to-back state championships for 2000-2001 also the high point champion at the GHSA state meet in 2001 and state long jump champion in 2001. Coach Tinsley received a football scholarship to the University of Tennessee, where he was a running back, wide receiver, and special team player from 2001-2004, and later an undrafted free agent in 2005 with the Atlanta Falcons. Coach Tinsley is proud to be back home with his family and supportive community, including his wife Ashlee Tinsley and his twins Izabelle and Isaiah Tinsley 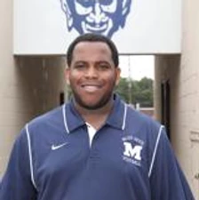 Brandon Nicholson will be entering his 5th season as a throws coach for Marietta track program and his 4th as the head middle school track coach. He is eager and excited to assist the Middle School students learn and improve their throwing skill.  This is his 5th year teaching in MCS at Marietta Middle School teaching 7th grade science. He is a graduate of Georgia State University where he holds a Bachelor of Science degree in Middle Level Education with concentrations in both Science and Math. He is excited to be a part of the Marietta Community. His passion for youth and athletics are what led him to become a part of the Marietta Blue Devil Track Program. 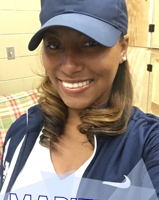 Alana McLemore will be entering her 4th season as a sprints and relays coach for The Marietta Middle School track program; however, she coached girls track for 4 years at Sandy Springs Charter Middle School, in addition to coaching cheerleading and tumbling. Coach Mac is  an 8th grade Special Education Mathematics teacher at Marietta Middle School. She looks forward to continuing the legacy of building athletes and leaders through the amazing feeder track program that has been formed with Marietta High School.

Coach Mac is a native of Atlanta, Georgia and graduate of St. Pius X Catholic High School. She earned a Bachelor of Arts degree from Howard University in Washington, DC, where she also cheered for both the football and basketball teams for three years. Her passion for wanting to mold young minds led her to obtain a Masters of Art in Special Education, which she has joyfully taught for the past 7 years. Coach McLemore recently purchased her first home Austell, GA, and is very excited be a part of the Marietta City Schools Family.